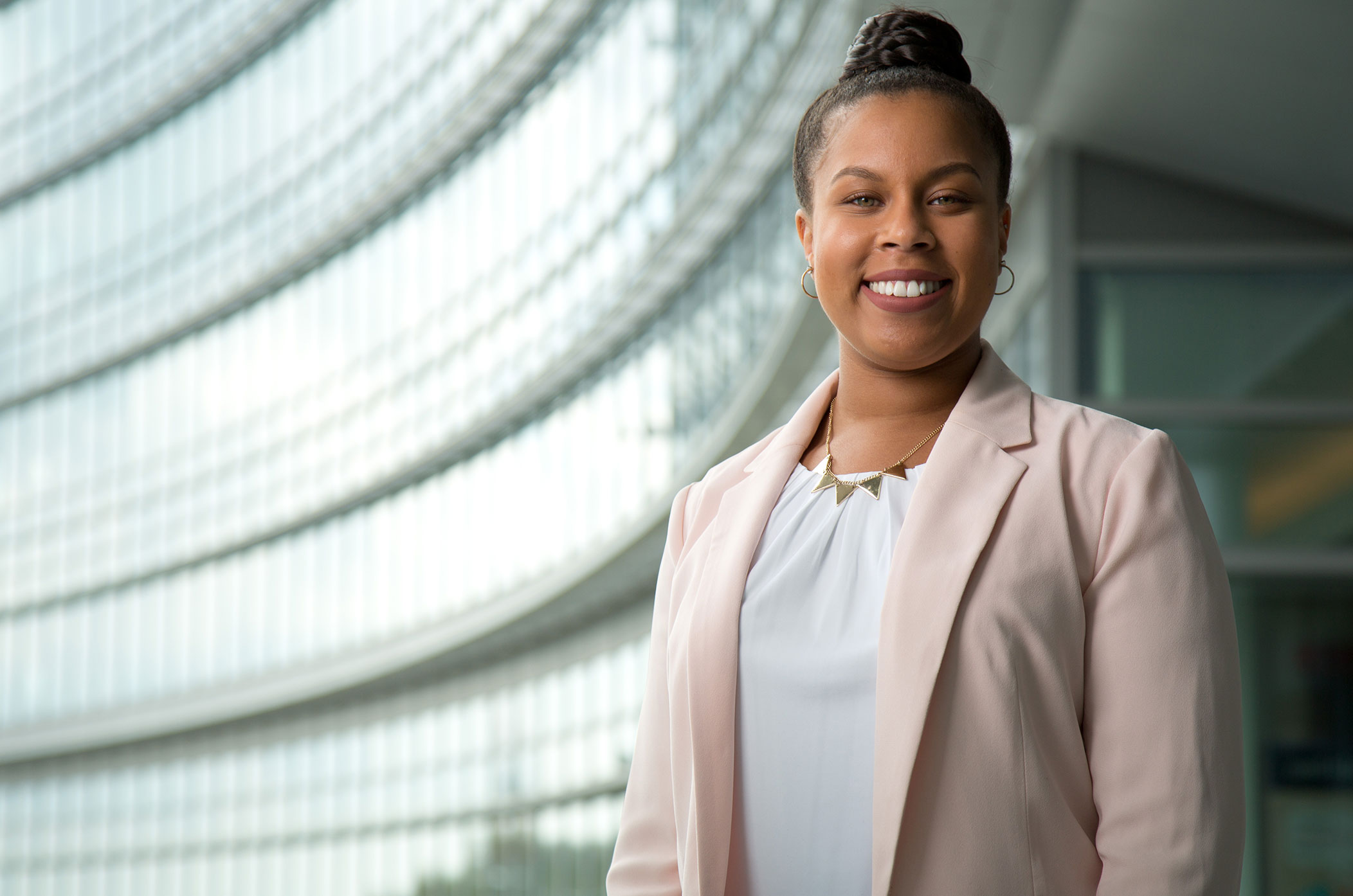 Ariana Carver on Relationship Building and the Future of American Manufacturing

Read a typical MBA brochure and you’re unlikely to find words like poise or grace or the concept of emotional intelligence associated with a graduate business degree or the launch of a corporate career.

But walk with Ariana Carver as she navigates the shop floor of Eaton Corporation’s hydraulic motor assembly plant in Shawnee Oklahoma and you quickly appreciate the agility required of a new Human Resource Development Participant starting her second rotation in a year-long HR training program.

“You quickly realize that people on the shop floor — a lot of them have been there for 20/30 years — and they carry a lot of knowledge and insight regarding the business,” Carver says. “Eaton is trying to be more employee centric…to let the employees know that they are being heard.”

Carver joined Eaton after pairing an undergraduate degree in psychology with a fifth year MBA, at John Carroll University. She describes walking into graduate level finance and accounting courses as her first hurdle. “I was hesitant and nervous to start the class, and I struggled,” she says. “Dr. Andrew Welki helped me every step of the way. He gave me the confidence I needed to succeed.”

Like all large global multinationals, Eaton Corporation, a nearly $22 billion power management company is rethinking what it means to serve both shareholders and stakeholders (including its 99,000 employees) in an age of shifting demographics and a warming planet. Issues such as worker safety and well-being, and diversity require human resource teams to close the distance — real and cultural — between headquarters and the manufacturing floor.

“You're dealing with people and people's lives,” says Carver. “So, the base of any culture requires some measure of honesty and transparency.” After a quick welcome at corporate headquarters in metro Cleveland, Carver began the first of her plant rotations, where she had an immediate epiphany.

As an African American female just out of graduate school, Carver recognizes that she plays an important role as listening post and intermediary. “Representation matters,” she says. “Being a woman, and being a person of color, and being visible on the floor with our hourly population and with some of our younger employees…I bring a different perspective.”

Carver credits Eaton with welcoming a more diverse set of people and insights as they grow forward in a world of changing demographics. As an undergraduate with a liberal arts major, she “learned to look at things from a big picture.”

“I think it allowed me to kind of see the business holistically,” Carver says. “Instead of diving immediately into accounting or finance, I learned to connect aspects of the business.”

As she continues her initial human resource rotation, and thinks about the future, Carver sees a role for someone who can comfortably move and negotiate between the manufacturing front line and corporate.

“Eaton is in transition,” she says. “It’s asking itself how it can better attract, retain and assess talent that’s valuable to the company.”

She continues: “I think in my role, now especially, being in the plant is relationship building. A lot of the times there's this invisible wall between management and the manufacturing floor. Building trust is a big factor, because if people trust you, you can solve problems.”

As someone who finds herself between Millennials and Generation Z, Carver also knows that the future of work will bring change regarding a more “cross-functional mindset.” Eaton, she says, looks to cultures in Silicon Valley and other technology hubs for ideas on how to get the most out of its workforce. “We’re bringing people from different functions to work on a product or strategic challenge to ensure that different perspectives are represented. All organizations, you would think, are beginning to flatten.”

On that new more level plain, Carver hopes to hold tight to these initial experiences. “The more time I spend in the plant, the more I appreciate the connection people feel to the work. This is their life.

“I'm inspired to close that gap that I described earlier between the management and the shop floor. And making sure that the experiences that I get here in the plant, I never lose sight of the motivations, the concerns, the issues that people on the floor have as I kind of move up in the company.”

Carver pauses, before bringing the thought full circle. “Hopefully,” she says, “I will never lose sight of the people that I'm basically working for.”