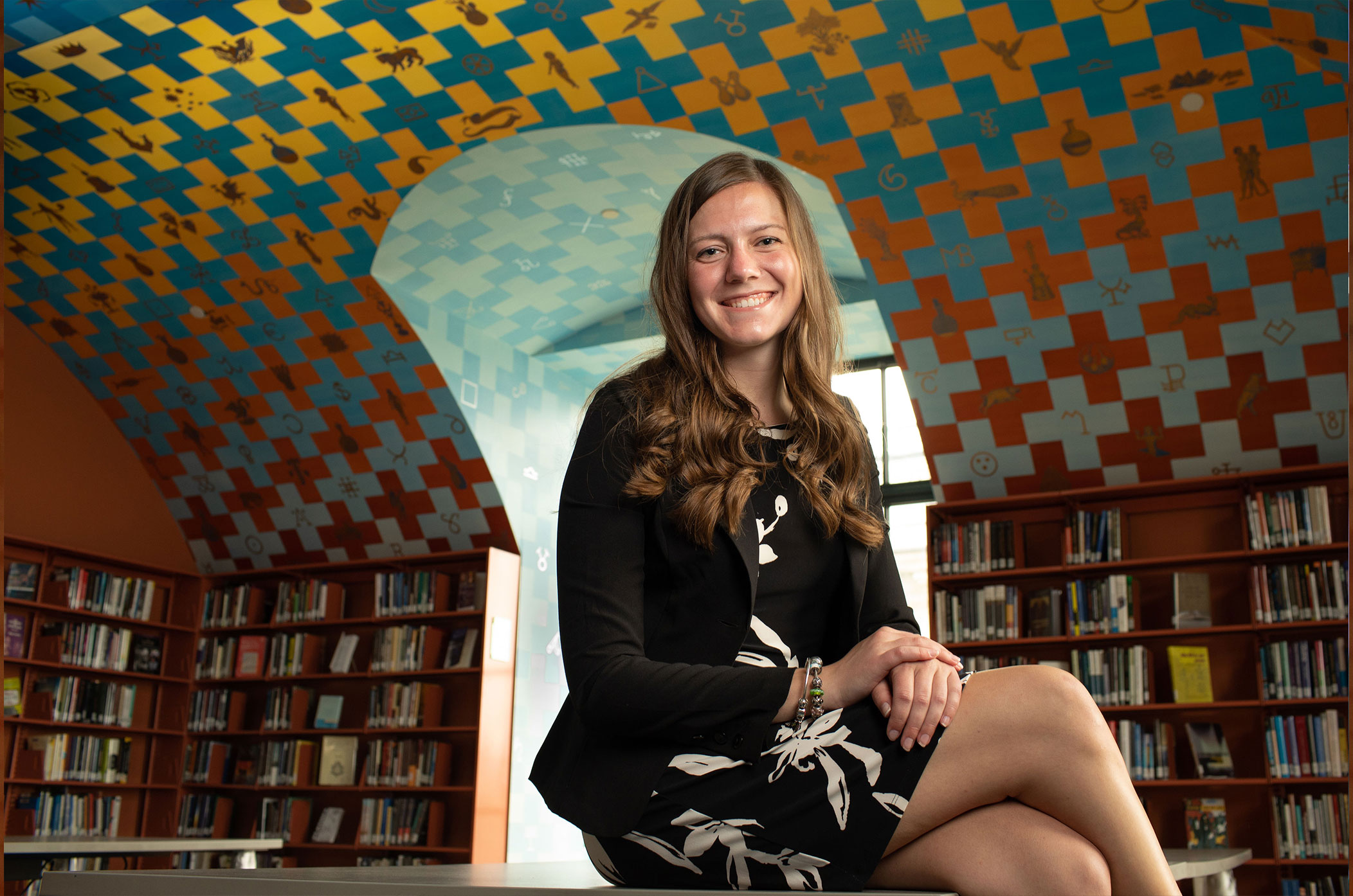 Elizabeth Evankovich (Accounting, 2019) approached her senior year with a deadline for her Senior Honors Project, several good ideas and a range of defining experiences.

As a student in the Boler College of Business, she’d worked through various business and audit cases complete with the kinds of constraints and incomplete information typically faced by companies, nonprofits, and government organizations.

As a Leadership Scholar, she had analyzed issues, exercised judgment, and made difficult decisions — the hallmarks of skillful leadership — as a volunteer with the Center for Service and Social Action.

As a student in the Honors Program, she had studied history, literature and philosophy — and came to understand something about universal human behaviors and dilemmas, across civilizations and time.

Evankovich credits core Honors Program classes and a robust conversation around responsible leadership in the Leadership Scholars group for leading her toward her Senior Honors Project topic. She wanted to apply her financial insights to non-profits, specially asking how such organizations, regionally and nationally deal with the threat of fraud.

“It can be a perfect storm,” Evankovich says of non-profit fraud risk. “You have a lot of overworked people and volunteers, and often a lack of accounting best practices. You have ideals — it’s assumed that everyone joins to achieve a higher good. And you have reliance on donors, and an extreme sensitivity to anything — any bad news — that would compromise the trust of donors.”

A report from the Association of Certified Fraud Examiners finds that small businesses and non-profits are both disproportionately victimized by fraud and notably under-protected by anti-fraud controls, a combination that makes them significantly vulnerable to the threat.

All John Carroll Honors students complete an Honors Project, which entails independent study and research under the direction of a faculty advisor. “From day one at John Carroll, we were encouraged to make connections between disciplines,” Evankovich says. “That habit trained my mind to think in a more integrated way.”

Evankovich thanks her project advisor, Accounting Executive-in-Residence Don Dailey, for bringing the perspective of an experienced non-profit board member. “Mr. Dailey helped me to navigate the sensitivities within organizations,” she says. “Fraud can be taboo because it threatens reputation and their ability to attract future donors and volunteers.”

Dailey, having advised several Honors students over the last half decade, recognized in Evankovich a willingness to break ground. “I’ve seen this before in John Carroll Honors students,” Dailey says, “a certain willingness to extend beyond their comfort zone. I think with Elizabeth, she saw an opportunity not simply to fulfill a requirement, but to really drill deeper into a topic that some might avoid, and to create something of value for Cleveland’s non-profit community.”

Through surveys with non-profit leaders, and interviews with faculty from John Carrol University’s Nonprofit Administration Program, Evankovich narrowed her focus to the role that whistleblowers can play in either preventing or limiting fraudulent actions.

The Association of Certified Fraud Examiners finds that tips — even more than formal outside audits — are consistently and by far the most common detection method. Over 40% of all reported cases in their study were detected by a tip — more than twice the rate of any other detection method. Employees accounted for nearly half of all tips that led to the discovery of fraud. Organizations that adopt such hotlines detect frauds 50 percent more quickly and suffer significantly lower losses.

In addition to her formal Honors Project report, Evankovich produced a tri-fold brochure that informs non-profits of fraud risks/detection, and the availability of low-cost third-party hotlines that give potential whistleblowers confidence and reassurance.

“She could have checked a box and turned in her project,” Dailey says, “but Elizabeth wanted to fulfill that Jesuit ideal of being “men and women for others.”

Asked why she went the extra mile, Evankovich, who recently began her career in the auditing department of Ernst & Young’s Cleveland office says: “I wanted to create something of real and lasting value. I hope that I succeeded.”