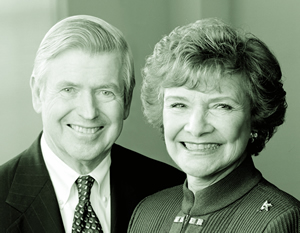 After graduating in 1956 from the College of Business, John Boler quickly advanced on the corporate ladder. Beginning at Clevite Corporate, he moved on to Clevite’s parent company, the Gould Corporation, where he reached the promoted status of Vice President of Administration and Director of South American Operations. From this position, John left Gould to embark on his own entrepreneurial ventures by starting the Boler Company.

John built The Boler Company into what is now, one of the world’s largest suppliers of truck suspensions and other vital components for the transportation industry. His company is recognized as the industry leader in innovative development and design of component parts.

In addition to being an incredibly successful entrepreneur and generous benefactors, the Bolers are exceptionally nice people and The John M. and Mary Jo Boler College of Business sincerely appreciates their continued commitment to our efforts.