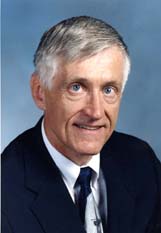 Dr. Frank J. Navratil returned to the faculty status in 2005 after serving as the dean of the John M. and Mary Jo Boler School of Business at John Carroll University for more than 20 years. He was Chairman of the Department of Economics at John Carroll from 1975-1985. During the 1978-79 academic year, Dr. Navratil took a leave of absence to work as a financial economist at the National Credit Union Administration in Washington, D.C. In 1983-84, he was a Visiting Scholar in the Office of Policy and Economic Research at the Federal Home Loan Bank Board in Washington. From September 2013 until August 2014, Frank was the Interim Dean of the Merrick School of Business at the University of Baltimore in Maryland.

Dr. Navratil has published articles on human migration, the economics of credit unions and mortgages, and has done research on the impact of federal fiscal policies on regional economic growth. His publications have appeared in the Journal of Finance, Journal of Financial Research, and Southern Economic Journal, as well as other academic and professional journals.

Frank served on the Board of Directors of AACSB International, The Association to Advance Collegiate Schools of Business, from July 2001 until June 2004. From 1999 until June 2001, he was the chairperson of AACSB’s Candidacy Committee. He has served as an advisor and mentor to many schools going through the accreditation process, as well as being a peer reviewer. He consults with schools regarding accreditation, strategic planning, and quality improvement issues.

Frank and his wife, Jean, have three adult children and four grandchildren. The Navratils reside in University Heights, Ohio.